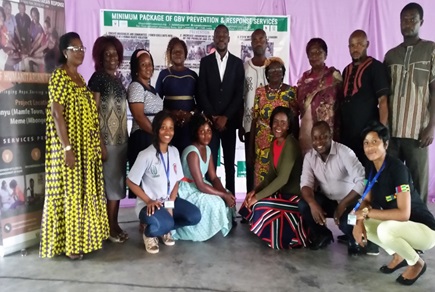 The two English speaking regions of Cameroon, Southwest and Northwest have been rocked by the current socio-economic conflict resulting to consequential population displacement, economic hardship as well as destruction of social amenities. It is no doubt an urgent need for provision of shelter and non-food item (NFI), protection, health and security as depicted by inter-sector working group and PLAN international in the two English speaking regions in a need assessment conducted in March to April 2018. Amid other plights, some displaced persons flee their homes with little or nothing of their belongings while a majority of them loss their properties to massive destruction. The increase rate of psychological trauma is not left out as some of the IDP’s who were farmers can no longer access their homes nor farmlands.

The training took place in Mamfe on October 31st 2018 and the community mobilizers were trained on 3 modules; Psycho-social first aid, protection mainstreaming and humanitarian principles.

To successfully carryout this training, these three modules were employed in this order;  Psycho-social First Aid, Protection Mainstreaming and Humanitarian Principles modules.

The workshop which was scheduled on October 31st kick start at 11:00am following the arrivals of all the participants in the event hall. The workshop was graced with a word of prayer from a participant after which facilitators and participants introduced themselves. This was followed by the introduction of the project  objectives by the facilitators. The Divisional Officer of Mamfe opened the workshop and this was followed by the training proper with the above-mentioned modules of training.

Psycho-social first aid was accompanied by role played by the participants and it was heart-warming when participants acknowledge their understanding of the whole concept of the training by their various role-played.

At the end of the workshop, monitoring sheets were distributed to all the community mobilizers in order to provide information and update to LUKMEF, with the number of people they provide psycho-social first aid to as well as the identification of IDP. A tent was set up at the grand stand where the target population could easily get access.

One of the participants congratulated the facilitators for a job well done and expressed gratitude for such a skillful training.