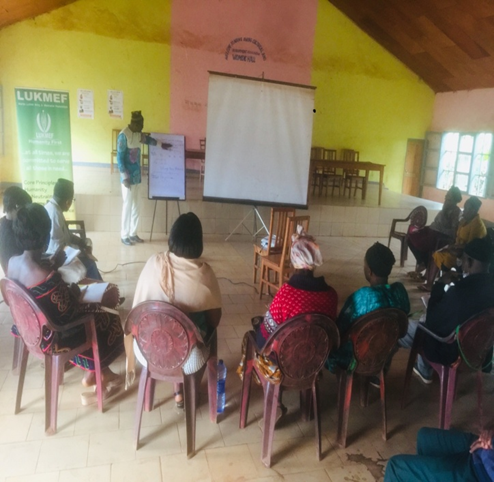 Education is the fundamental right of every child, a key to a bright future and a peaceful community. In creating educational opportunities for most of the vulnerable children in conflict-affected communities in the North West region, an organization known as street child partnerships with LUKMEF in an Education in Emergency Pilot project.  The project was launched on the 20th of April 2021 at the Awing Fon’s palace attended by the School-Based Management Committee members made up of the Fon and quarter heads. A total of 11 Community Education Committee members were elected and further trained by the CEO of LUKMEF Mr. Tanyi Christian in a two-day session on their roles and responsibilities as community Education Committee members. During this training session, an executive of seven persons was elected into the following positions; Chairperson and vice, secretary, treasurer, secretary of the traditional ruler, and the public relations officer. In order to access the present state of education in Awing, the participants brought out the risks associated with children in the conflict which include; early pregnancy, early marriages, kidnapping, stray bullets, trauma, and parent’s inability to provide basic school needs. Some of the mitigations to these risks raised were; support parents through income-generating activities to revive their economic abilities, teachers should ensure that children play only within the school premises.

Five schools were selected to partake in the education project on the criteria of the highest population in the 14 schools found in Awing. These five pilot schools will be given textbooks and each pupil will be entitled to a textbook in all the subjects. These books will be kept in mini-libraries so that those moving into these classes inherit the books.

According to the project coordinator, the books will be made available on the 30th of April which will therefore uplift the burden on parents in buying textbooks. Meanwhile, the success of the project will lead to an extension to other schools and neighboring communities.